Nasal sinuses are hollow, air containing cavities in the skull behind the forehead and cheeks of the face. There are four pairs of sinuses and these are referred to as the paranasal sinuses. Sinusitis occurs when one or more sinuses become inflamed or infected. Allergic triggers commonly cause sinus disease. Sinusitis is a common problem affecting millions of people around the world.

There are four paired sinuses called Paranasal Sinuses. The paranasal sinuses consist of the following:

Ethmoidal Sinuses: These are paired sinuses located in between the eyes and nasal cavity. Each sinus consists of 4 – 18 air containing cavities – the ethmoidal air cells. These sinuses are present at birth and continue to grow until adolescence. The anterior air cells open into the middle meatus and the posterior group open into the superior meatus.

Maxillary Sinus: It is the largest of all sinuses with a volume of about 15 ml. These are paired cavities located inside the face around the area of the cheeks. This sinus is also present at birth and continues to grow afterwards. The sinus opens into the middle meatus.

Frontal Sinus: This is the last of the sinuses to develop. These are paired cavities located inside the face around the area of the forehead. The sinuses open into the middle meatus.

Sphenoid Sinus: These are also paired cavities located deep in the face behind the nose. Each sinus has a volume of about 7.5 ml. They open into a small recess behind the superior meatus. 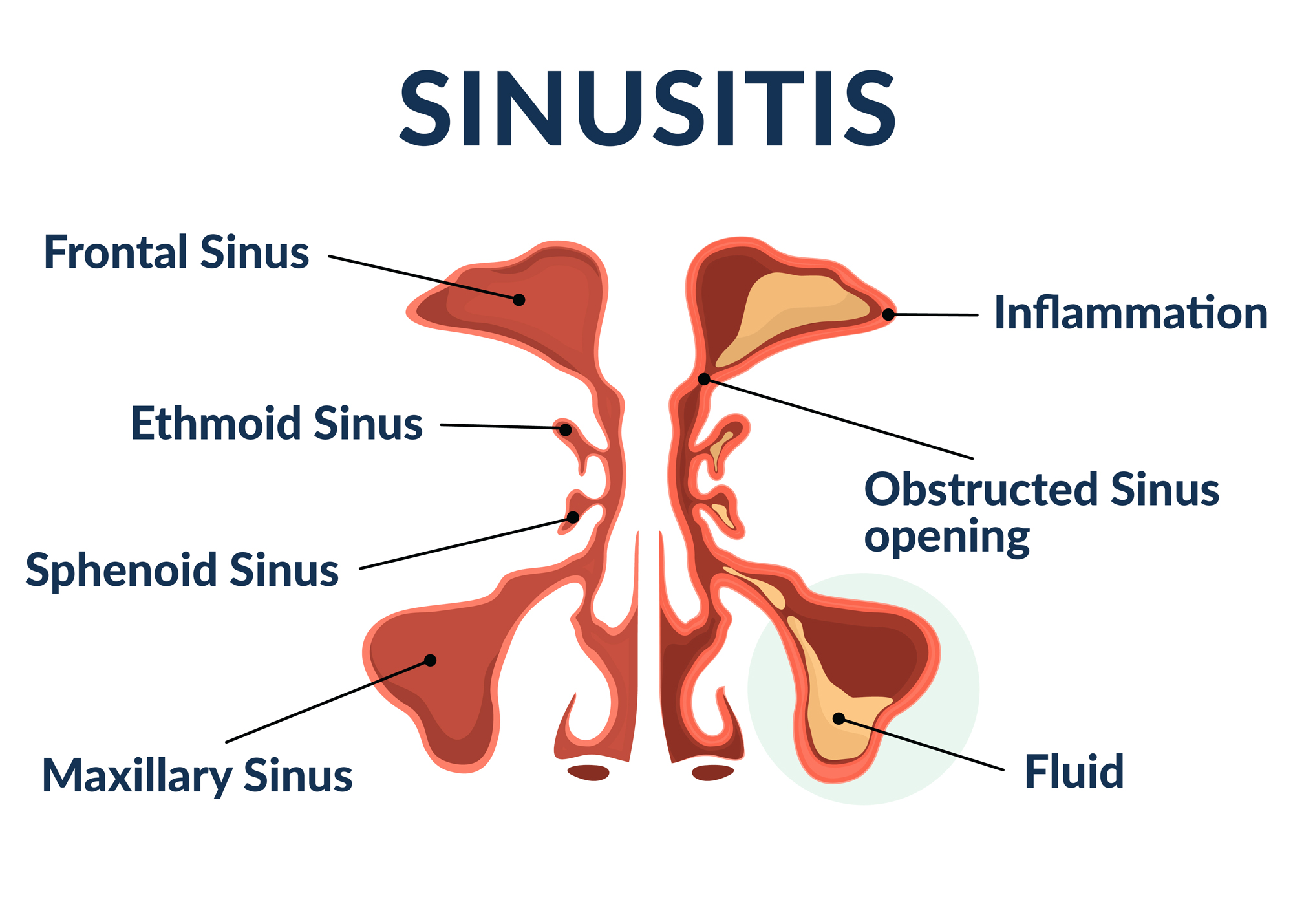 One of the most common symptoms of sinusitis is pain, and the location depends on which sinus is affected.

If your upper jaw and teeth ache, and your cheeks become tender to the touch, you may have an infection in the maxillary sinuses.

If you have swelling of the eyelids and tissues around your eyes, and pain between your eyes, you may have inflammation of the ethmoid sinuses that are near the tear ducts in the corner of your eyes. Ethmoid inflammation also can cause a stuffy nose, a loss of smell, and tenderness when you touch the sides of your nose.

If you have earaches, neck pain, and deep achiness at the top of your head, you may have infection in the sphenoid sinuses, although these sinuses are less frequently affected.

Most people with sinusitis have pain or tenderness in several locations, and their symptoms usually do not clearly indicate which sinuses are inflamed.

In addition to the pain, people with sinusitis frequently have thick nasal secretions that are yellow, green, or blood-tinged. Sometimes these secretions, referred to as post-nasal drip, drain in the back of the throat and are difficult to get rid of. Also chronic sinusitis is strongly associated with nasal symptoms such as a stuffy nose, as well as with a general feeling of fullness over the entire face.

Less common symptoms of sinusitis can include:

In chronic sinusitis, the membranes of both the paranasal sinuses and the nose are thickened because they are constantly inflamed.

Most experts now use the term “chronic rhinosinusitis” to describe this condition, and they also recommend that the condition be divided into rhinosinusitis with or without nasal polyps.

Nasal polyps are grape-like growths of the sinus membranes that protrude into the sinuses or into the nasal passages. Polyps make it even more difficult for the sinuses to drain and for air to pass through the nose.

The condition often occurs in people with asthma, the majority of whom have allergies. It is possible that constant exposure to inhaled allergens that are present year-round, such as house dust mites, pets, mold (a kind of fungus), and cockroaches cause chronic inflammation of the nose and the sinuses.

An allergic reaction to certain fungi may be responsible for at least some cases of chronic sinusitis; this condition is called “allergic fungal sinusitis.” However, at least half of all people with chronic rhinosinusitis do not have allergies.

Another group of people who may develop chronic sinusitis are those with significant anatomic (structure) variations inside the nose, such as a deviated septum, that lead to blockage of mucus. 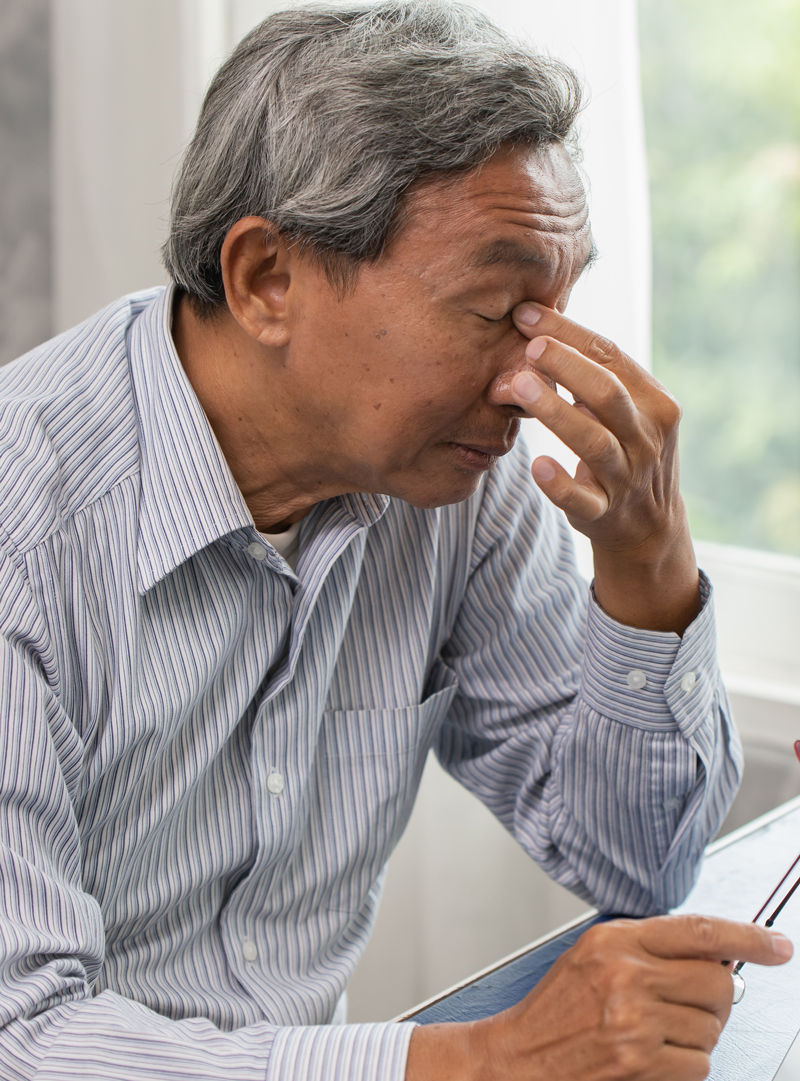 Because your nose can get stuffy when you have a condition like the common cold, you may confuse simple nasal congestion with sinusitis. A cold, however, usually lasts about 7 to 10 days and goes away without treatment. Acute sinusitis often lasts longer and typically causes more symptoms than a cold.

Your doctor can usually diagnose acute sinusitis by noting your symptoms and doing a physical examination, which includes examining your nasal tissues.

Tests your doctor may use to diagnose chronic sinusitis include: 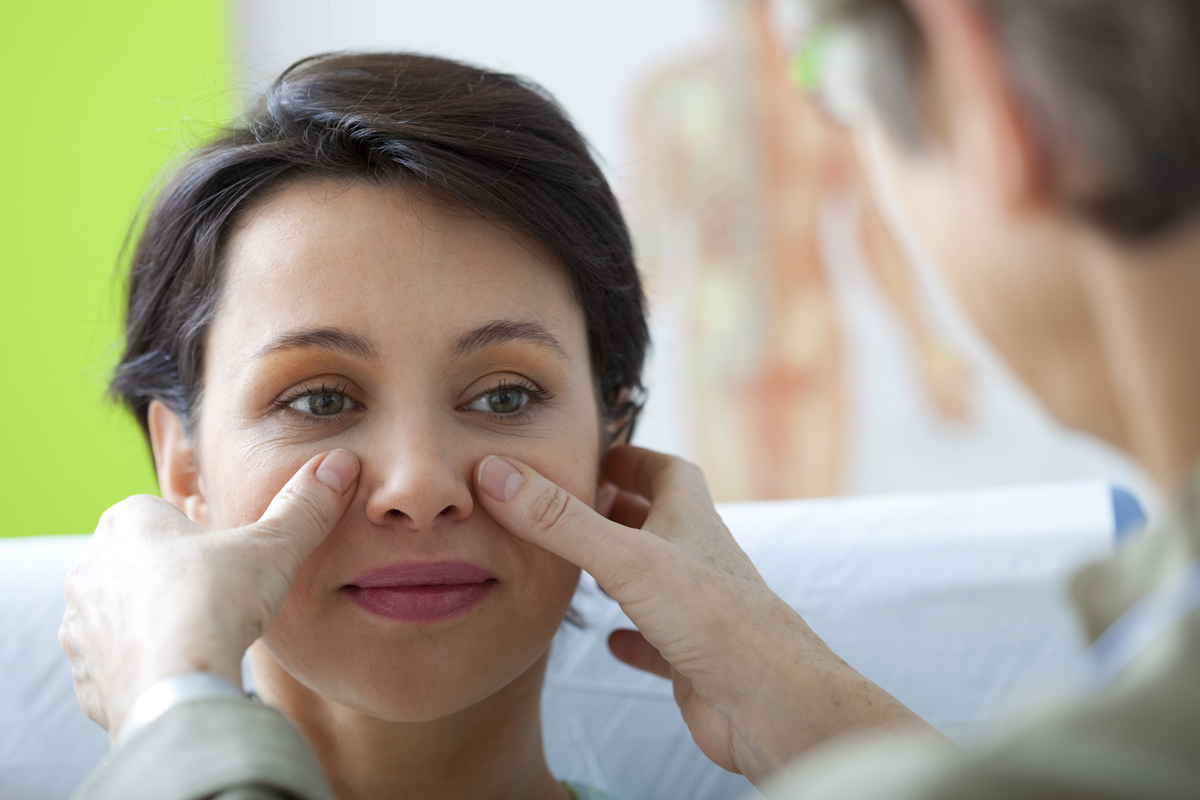 Have you been diagnosed with chronic sinusitis, or think you may have a sinus disease? Contact us today to schedule an appointment for accurate diagnosis with safe and effective treatment. Dr. Latall and our team at Premier Allergy, Asthma & Sinus Care are here to answer any questions and concerns you may have about chronic sinusitis care.